CSCC ROUND 4 : ACTION PACKED, SENSATIONS AND EMOTIONS  NO CONCESSIONS DÉRY WINS A SECOND AND CONSECUTIVE RACE

CSCC ROUND 4 : ACTION PACKED, SENSATIONS AND EMOTIONS  NO CONCESSIONS 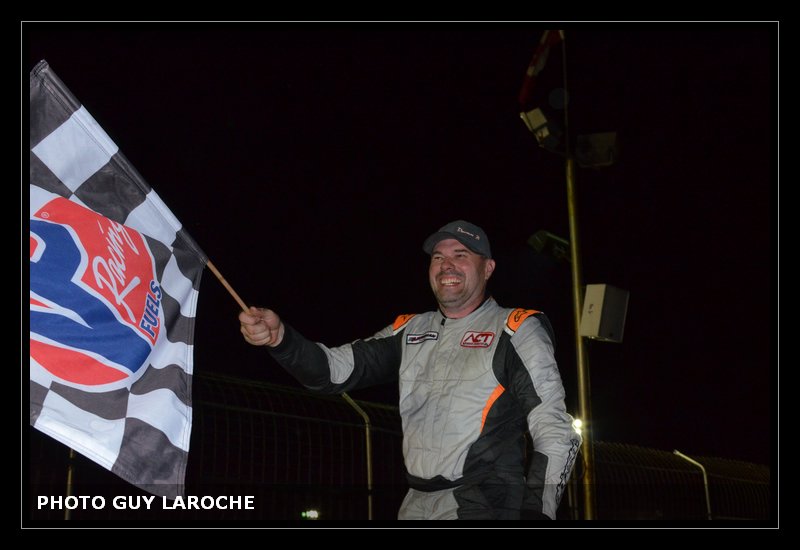 ST-EUSTACHE, QC  Quebec Citys Jean-François DÉRY outsmarted his fellow drivers by racing smart to a second and consecutive win on the Canadian Stock Car Championship (CSCC) for Late Models.  He edged out Patrick CLICHE of Levis, Patrick LAPERLE of St-Denis on the Richelieu, Martin GOULET Jr of Terrebonne and Dany TRÉPANIER of St-Édouard de Lotinière who rounded out the top five. 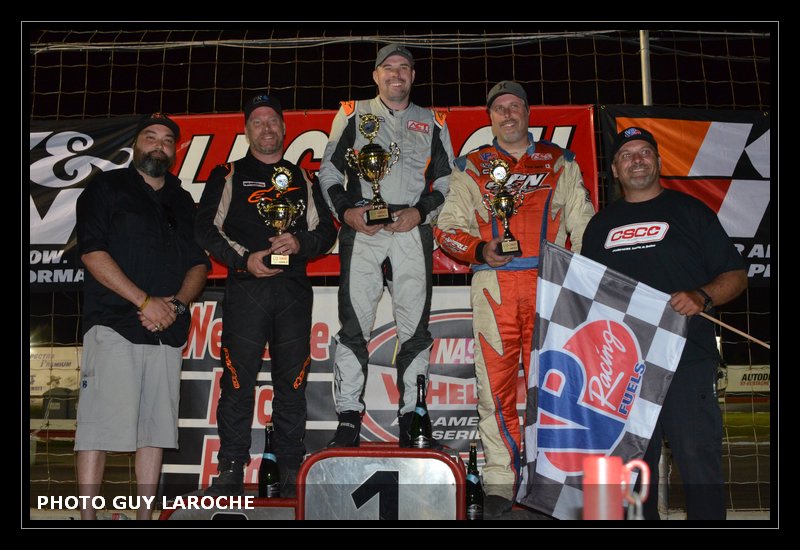 The 125 lap event was ran on the Autodrome St-Eustache (St-Eustache, QC) 4/10-mile oval located just North of Montreal and provided a taste to everyones liking.  Old school hard door-to-door racing, hard charging passes, aggressive two wide, three wide and even four wide at times.  But it did not come without a price: the first one hundred laps were run in under one hour, while the last twenty five laps took as much time!  None of the drivers were ready to give an inch to his fellow racers:  Audacious, foolhardy and even wreck less moves slowed the race a record 17 times.  A red flag was also required to let the safety crew attend to the racing automobile of Steve CÔTÉ which was engulfed in flames after his transmission literally exploded with a handful of laps to go as he was running third in the event.  He cant shake the bad luck off his back!  One thing was unanimous about the thousands of spectators on site: they got their moneys worth and let us know as the visited the pits after the event.

I just cant get over it.  The first 100 laps were raced exactly like the guys normally race: a couple cautions, nice and intense battles.  Drivers are self-disciplined and show respect.  But it was so for the last 25 laps.  It look like a race run under a full moon or if there was 100,000$ posted for the win.  Its clear in my mind that an adjustment will be required declared Promoter and Race Director Marc Patrick Roy.

Steve CÔTÉ of LÎle-Bizard and Jean-Philippe BERGERON of Terrebonne lead the front row of the 18-car field.  Because of his pole starting position, CÔTÉ wins the Spring to the Pole Award presented by EIBACH Canada.  CÔTÉ, who calls St-Eustache home, jumped in the lead and paced the field for the first 28 laps until the first caution flew.

Multi-time Champion Patrick LAPERLE, who was racing for the first time with the CSCC group this year, took advantage of the restart to overtake CÔTÉ for the lead.  He would hold on to the lead until lap 101 when contact between him and Dany TRÉPANIER, the points leader, sent him spinning in front of the field and drawing out yet another caution.  TRÉPANIER was sent to the rear, while LAPERLE headed down pit lane to replace a flat tire and rejoin the group at the tail of the field.  The two of them charged their way to the front... leaving behind them some sparks and scars.

At the restart, Pier-Luc Ouellet of Terrebonne and CÔTÉ each led a lap, but then Jean-François DÉRY sneaked by to take over the lead, on lap 104, and never looked back leading the rest of the distance.  Another great run by the former Champion who sits eight in points despite having missed the season opening event and is 99 points short of TRÉPANIER the points leader.

Dany TRÉPANIER turned the fastest lap of the day in practice, 17.604, and had a very fast car.  He won his qualifier race.  In the feature race, he managed to salvage a fifth place finish and staying at the top of the leader board despite having had to go to the rear twice for the incidents involving LAPERLE and one with Claude LECLERC of Lanoraie who ended up finishing 11th.

If tempers were hot for many, it wasnt so for four rookies, who finished in the top-10.  Jean-Philippe BERGERON, the points leader in the Attaches Montreal Hitch Rookie standings, finished 6th just ahead of Rémi PERREAULT (7th), Martin HÉBERT (8th) and Vincent VACHON (10th).  In this case, none of them drove over their heads, and being cautious paid off well.

A blind draw was held for a 5 gal of VP racing fuel, presented by DL PERFORMANCE and VP Racing Fuels Quebec.

The next and 5th round of the Canadian Stock Car Championship, a 200 lap event, will be held on Saturday, July 21st, at Autodrome Montmagny.  Racing starts at 6:00pm.