CSCC ROUND 2 : STOCK-CARS BEST PUT ON A GREAT SHOW DONALD THEETGE OUTDUELS DERY FOR THE WIN AT MONTMAGNY

CSCC ROUND 2 : STOCK-CARS BEST PUT ON A GREAT SHOW

DONALD THEETGE OUTDUELS DERY FOR THE WIN AT MONTMAGNY 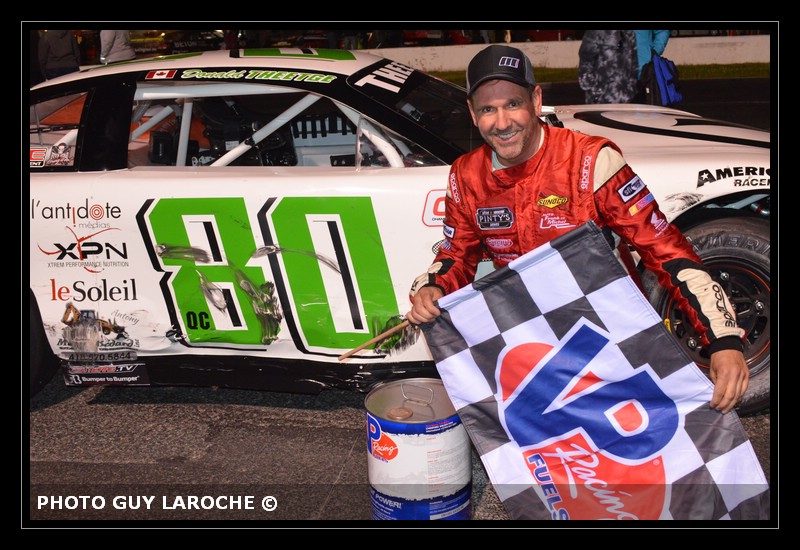 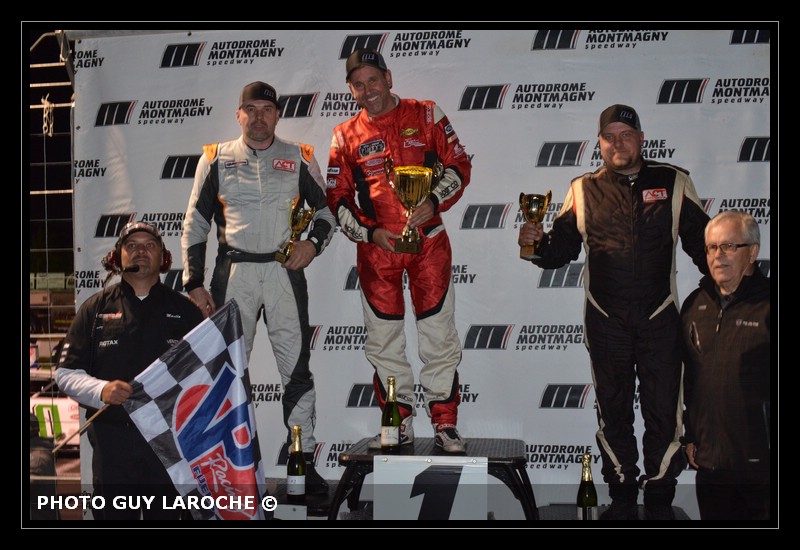 The 125 lap race was held Autodrome Montmagny track (Montmagny, Quebec), a 3/8-mile oval, located East of Quebec city.  A fast paced and action filled race from start to finish which delighted the large crowd in attendance.  The race was run in 80 minutes and was slowed for cautions 8 times.

Quebec Citys Gaetan Gaudreault and Ile-Bizards Steve Cote occupied the front row of the 20 car field.  Cote took advantage of the outside lane to take over the lead and set the pace for the first 55 laps, despite being attacked by Blainvilles Mathieu Kingsbury and Jonathan Bouvrette.  Cote was quick in the race and set the fastest lap during practice sessions at 17.994 seconds.  Unfortunately, miscalculation shorted him of a good finish, maybe even a top-5, when he ran out of gas.  I under estimated the gas consumption at this track and we ran out of gas.  We are very fortunate to have scored some precious Championship bonus points, leading and leading the most laps, that keeps us in the running declared Jonathan Cote, Steves crew chief and brother.

After starting 14th, Jean-Francois Dery took advantage of the second restart, while being second, to take over the lead dropping Cote to second.  Behind them, to the fans great please, Theetge, Bouvrette, Kingsbury, Vallee-Junctions Marc-Andre Cliche, Quebec Citys Simon Roussin and Terrebonnes Martin Jr Goulet were battling it out door to door and bumper to bumper.

Unlucky at the draw for starting positions, Theetge who started 12th, took the lead on lap 73 over Dery for the first time.  The duo exchanged the lead on four other occasions (laps 89, 96, 116 and 119). Theetge scores a first win in the CSCC LMS ranks and a 23rd career LMS win, he sits second on the overall Quebec driver list.  I was patient.  I started at the back and worked my way to the front while saving my tires.  And my crew made the right adjustments between the afternoon qualifiers and the evening race declared Theetge in victory circle who has already confirmed he will race in the next CSCC event.

Dery finished second and on Theetges bumper was making a first CSCC start.  He did not disappoint his fan based by racing like if he stole it.  In post race interview he said: And, Thats racing!  One could tell his great satisfaction.  He is credited with the Les construction Alain Gaudreault Hard Charger Award having gained 12 positions.

Dany Trepanier finishes third after starting 11th.  Involved in the first caution (lap 4), he made multiple visits down pit road for chassis adjustments and it proved to be an advantage at the end of the race. I remembered seeing Patrick Laperle never hesitating to visit the pits to make adjustments during a race and win.  We used the same strategy and it paid off said Trepanier who was very pleased with his 3rd place finish.  Sitting in 7th with 11 laps to go, an audacious move and a bit of luck he was able to get around Marc-Andre Cliche, Ouellette and Kingsbury.

Marc-Andre Cliche had a bitter sweet finish but a performance worthy of mention.  He was in the top-5 for the second part of the race and looked to be en route for a top-5 finish or maybe even a podium.  With 11 laps to go, on the last restart, as the field came to speed, Bouvrette momentarily slowed down and the whole outside lane.  He dropped from 2nd to 5th place and Cliche from 4th to 8th place.

If the racing up front was intense, it was as good further behind.  As a matter of fact, a great side-by-side battle over 20 laps, between Jean-Philippe Bergeron of Terrebonne and Remi Perreault of St-Paul de Joliette took place as they battle for the 13th spot.  At the finish, Perreault scored his first career top-10, finishing 10th and taking over the lead in the Montreal Hitch rookie standings.

Bergeron who dropped out of the race with suspension problems finished 14th.  Vincent Vachon, another rookie having a great run, was at times in front and other times behind the Bergeron-Perreault duo, but on the 93e circuit as the field was going to caution for the stopped vehicule of Simon Roussin, Vachon was hit hard by Gaudreault which ended his night.  The fourth rookie in the race, Martin Hebert, had an ill handling race car.  They opted to use the race as a tuning session and visited the pits multiple times before dropping out.

The third round of the Canadian Stock Car Championship, a 125 lap race, will be raced on Sunday June 24th at Autodrome Montmagny.  Post time 6:00 pm.