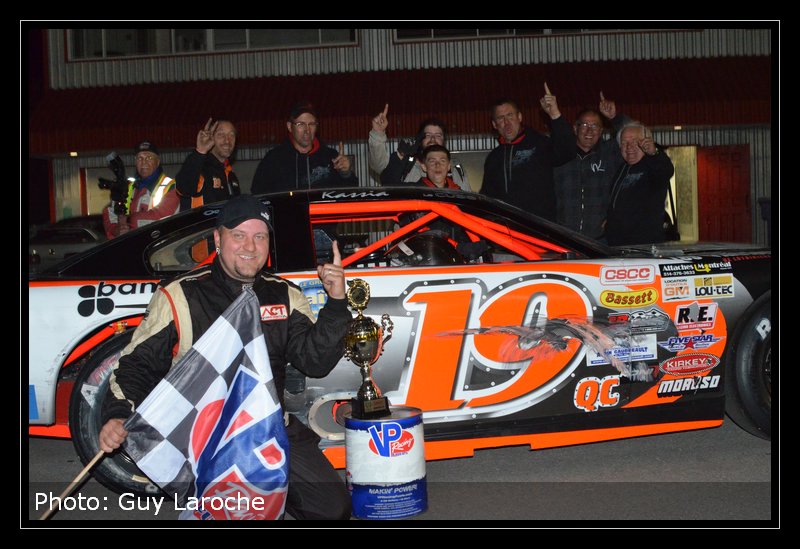 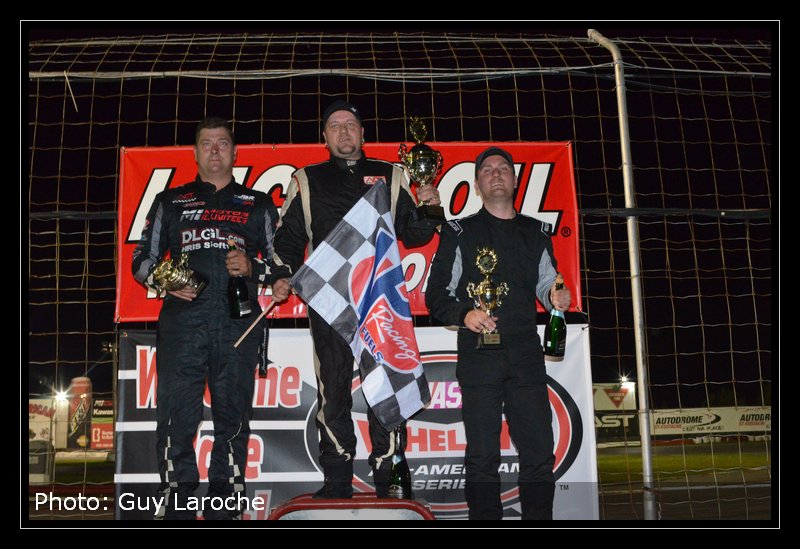 A 125 lap race held at Autodrome St-Eustaches 4/10-mile track, located in the Lower Laurentians, just North of Montreal. 17 drivers lined up for the first race of the year, which was also the touring series first race in history. I am so pleased. Last year we were very fast, but we had a suspension part failure. I was very anxious as my engine was showing signs of weakness. I was expecting it to explode at any moment. The win is very sweet and is possible due to our sponsors and my team members declared Trepanier. With this win brings his career total to five wins in the stock-car LMS ranks. Trepanier had recorded the fastest lap in two of three open practice sessions and won his qualifying race. He took the start in the third starting position and led the most laps (64) having led twice (8 to 66 and 119 to 125). Jonathan Bouvrette the Champion and winner of two of the LMS rounds held in 2017 at St-Eustache recorded the fast lap of the day in practice (17.500). He was involved in a wreck while leading his qualifying race, but was luckier in the redraw for starting positions as he drew the number 4 chip. Bouvrette was one of four leaders and imposed his rhythm for 51 laps. The driver, who won the Sportsman Lucas Oil and NASCAR Late Model Championships in 2017, Steve Cote, graduated to the CSCC Touring series. Despite limited experience in the LMS class of cars, he was identified as the favorite to win the race at his home track. He won his qualifying race and crossed the stripe in third place. Disappointed with his third place finish, he still showed the numerous fans on hand and his competitors that he will be a force to reckon with this summer. Jean-Pierre Ouimet of Terrebonne took advantage of the Bouvrette and Martin Latulippe (Vallée-Jonction) incident to win the third qualifying race. Carburetor issues sidelined him in the feature race. Pier-Luc Ouellette of Terrebonne and Patrick Cliche of Levis were the other feature race lap leaders having led each 1 and 5 laps. They finished respectively fifth and fourth in the feature race. Five drivers will participate in the Attaches Montreal rookie Championship: Jean-Philippe Bergeron (Terrebonne) finished 11th, Benoît Lemieux-Ayotte (Beloeil) was 12th, Vincent Vachon (Saint-Anges) was 13th, Martin Hebert (Roxton Pond) was 14th and Remi Perreault was 15th. Lemieux-Ayotte claims the Les Constructions Alain Gaudreault hard charger award with a plus five positions. The race was held in 72 minutes and slowed four times. The next and second round of the Canadian Stock Car Championship, a 125 lap race, will be held on June 9th at Autodrome St-Eustache. Post time is 6:00pm.